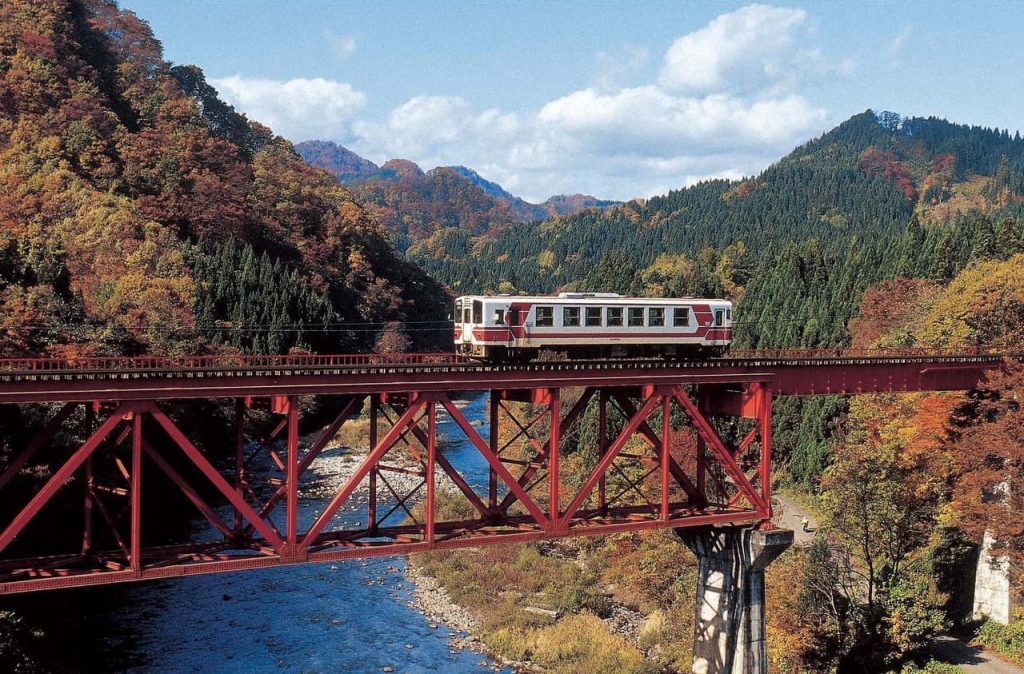 Since ancient times, it has been said that spring water and well water, which are natural waters, are suitable for sake brewing, for this reason, sake breweries gather in areas where good water is abundant, and it is often called a famous brewery. The three major rivers in  Akita Prefecture are the Omono River, the Yoneshiro River, the Koyoshi River and their tributaries which have many places where clear natural water springs out. Akita’s water is generally “soft water” as opposed to Nada’s “hard water”, so it produces mellow and delicate sake based on its characteristics. 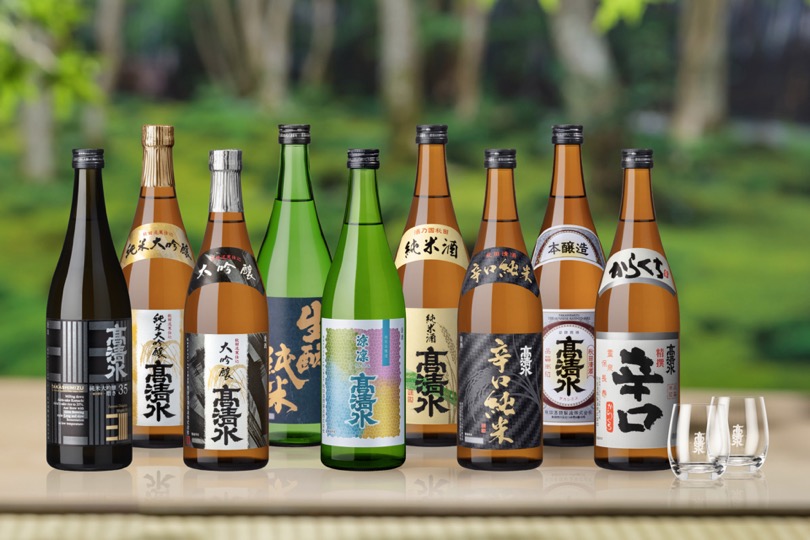 Akita Shurui Seizoh Sake Brewery was established after the merging of 12 small breweries. “Takashimizu” literally means “High spring water”. In Akita city, there is an area named “Hillock of Takashimizu”, where is famous for the source of water and still has a lot of spring water. It is said that the sacred spring “Takashimizu” was suddenly gushed in the middle of the 7th century in this area and it is still gently gushed out calmly today. Our brand name “Takashimizu” comes from this “Hillock of Takashimizu”. Kawashiri-area in Akita-city where our main brewery stand is also known as the area which is blessed with good quality water. 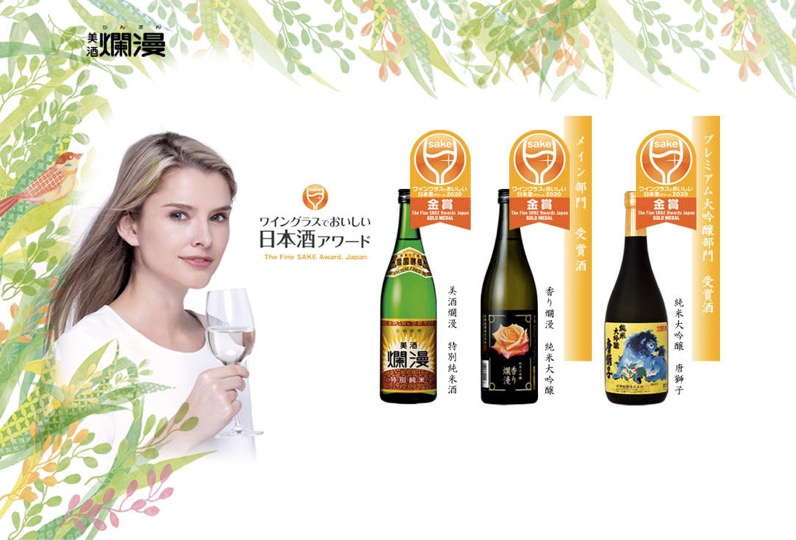 The brewery was founded in 1922 with the aim to bring sake brewed with good rice and abundant water to the Japanese market. Most breweries were run by small family businesses, hence the brewery was established by 88 investors from Akita Prefecture. The brewery is situated in the Yuzawa, from the southern part of Akita Prefecture located in the Yokote Basin. It is surrounded in the east by Ou Mountains and in the west by glorious rice paddies, along with Mt. Chokai spectacular in the distance. 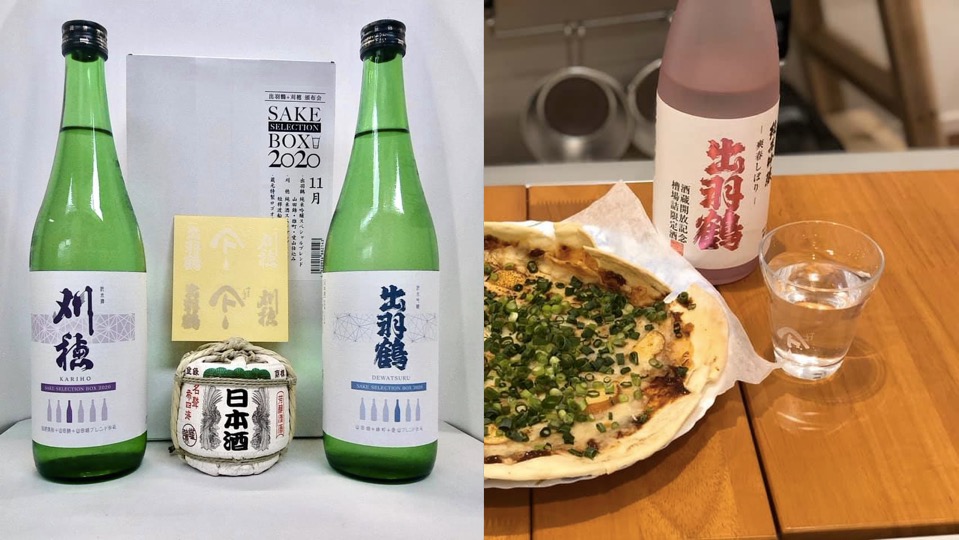 Our company was founded in 1865 at the end of the Tokugawa shogunate in Dewa no Kuni Minami Naraoka (currently Daisen City, Akita Prefecture) as “Yamato Sake Brewery” by Shigeshiro Ito, the 12th generation of the Ito family. Kyonosuke Ito (13th generation), who succeeded the 12th generation, commercialized the Yamato Sake Brewery in 1913 (Taisho 2). We named it “Dewatsuru” with the wish of “becoming a sake from the country of Dewa, which is as elegant as a crane”, and made a new start as Dewatsuru Sake Brewery Co., Ltd. The brewery is located in the mountains in the southern part of Akita Prefecture. With a clear climate of the four seasons, it is suitable for cultivating sake rice, which is warm and humid from summer to autumn, and is suitable for sake brewing because it is cold and snowy in winter. The mountains surrounding the brewery are called Dewa Hills, they are the source of abundant and clean spring water. 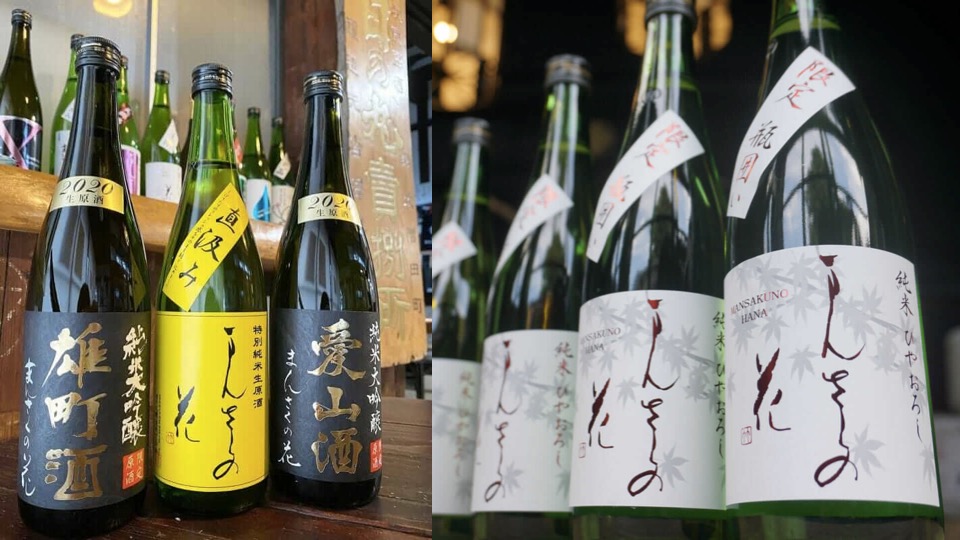 Hinomaru Jozo Sake Brewery was founded in 1689 and nationally designated as an important corporeal and cultural property in 2002. It has continuously produced the finest quality sake with utmost integrity for 323 years. In fact, the legacy of the brewery is intimately linked to the warlords of the feudal era. It was Lord Satake who bestowed on the brewery both the beautiful name, Hinomaru, “circle of the sun” and his famous insignia; the traditional Japanese folding fan opened to reveal the bright red rising sun. The pristine environment also has abundant sources for delicately soft and low mineral water that are ideal for sake making. The brewery has four wells of water from a pure ecosystem with origins in the protected National Park of Kurikoma Mountain. In addition, the ancient ‘sannai’ school of sake-making has its origins in Yokote. Through the ages, the most highly skilled toji (sake brewmasters) have laboriously produced the award-winning sake. 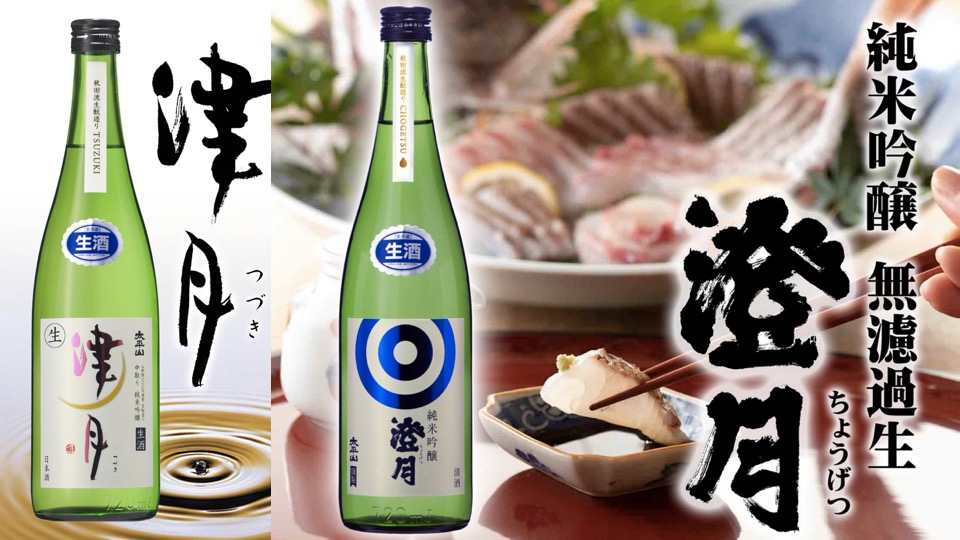 Kodama Sake Brewery was founded in 1879 in picturesque Katagami City, Akita Prefecture, the northwest of Japan. Blessed with abundant quality rice and fresh clean mountain water, the generations have nurtured and developed renowned expertise in brewing sake. Originally, the Kodama family started their business by making soy sauce and miso for local consumers. Soy sauce and miso have traditionally been basic essential seasonings in Japanese cuisine. Production of these quality “fermented” food products represented by “Yamakyu” brands still remains an important part of the brewery business. In 1913, Tomokichi Kodama, the second generation of the family business began making sake by the name “Taiheizan”. This brand name comes from the towering mountain in Akita City, Mt. Taihei (“Great Peaceful Mountain”) which has been the area’s spiritual symbol for centuries. Taiheizan Miyoshi Shrine, in Akita City overlooking Mt. Taihei, is still the most visited Shrine in Akita Prefecture for New Year worshipping today. 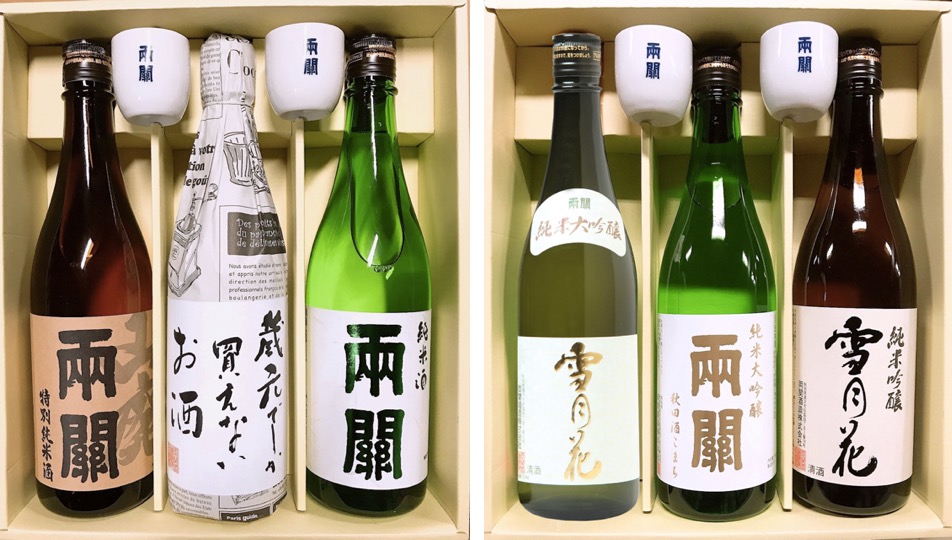 Yuzawa City in the Akita prefectures is famous for heavy snowfall. It has the preferable condition of hot summers and freezing winters to produce premium quality natural spring water. The Ryozeki Shuzo’s brewing process utilizes this high-quality underground water. Yuzawa City is one of the main areas for harvesting brewing suitable rice. The availability of high-quality water and rice makes Yuzawa a perfect location for sake production. The first brewery in Akita to received the grand prize from The National Institute of Brewing was Ryozeki Shuzo. This was achieved by proper utilization of great source of rice and water to produce high-quality delicious sake. The mottos of Ryozeki Shuzo are : (1) “To produce in harmony with the people, one must brew what brings harmony to the people” and (2) “Quality first.” 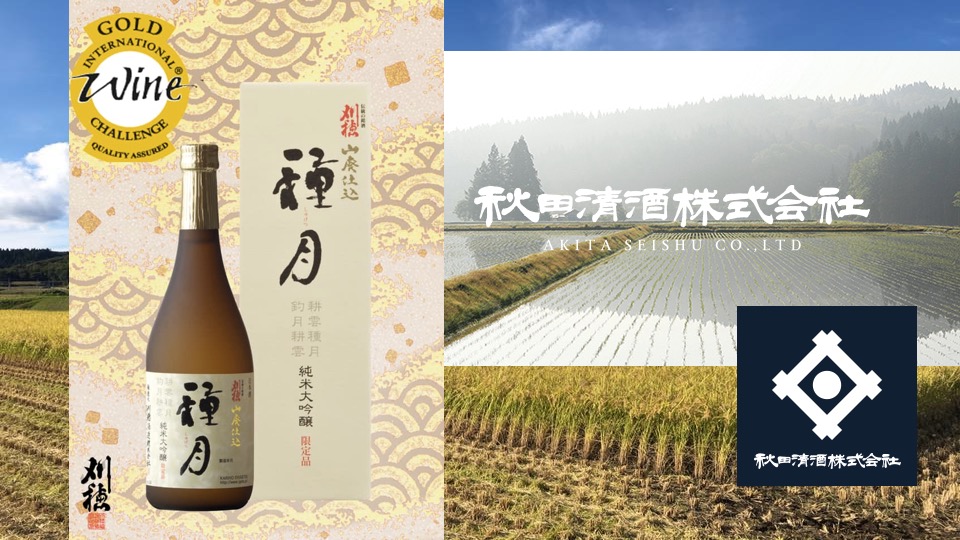 The brewery building, which is Akita Seishu, is a historical building built in 1850 (Kaei 3). Three years before Perry’s Black Ships arrived in Uraga, it was a time when the history of Japan, which had been isolated, began to move significantly. The warehouse built on the banks of the Omono River, which is the best in Akita Prefecture, was a base for logistics using water transportation. In 1913 (Taisho 2), Kyonosuke Ito, who runs a sake brewery in the neighboring village, took over this historic brewery and started the brewing business with his friends. The history of Akita Seishu begins here. The name of Kariho’s sake is derived from the Japanese poem “Autumn field Karihoan’s tomatoes, my clothes are getting wet with dew” by Emperor Tenji (626-671) during the Asuka period. This poem is said to be a waka poem that considers the lives of farmers who cultivate fields and has a deep meaning for sake brewers. 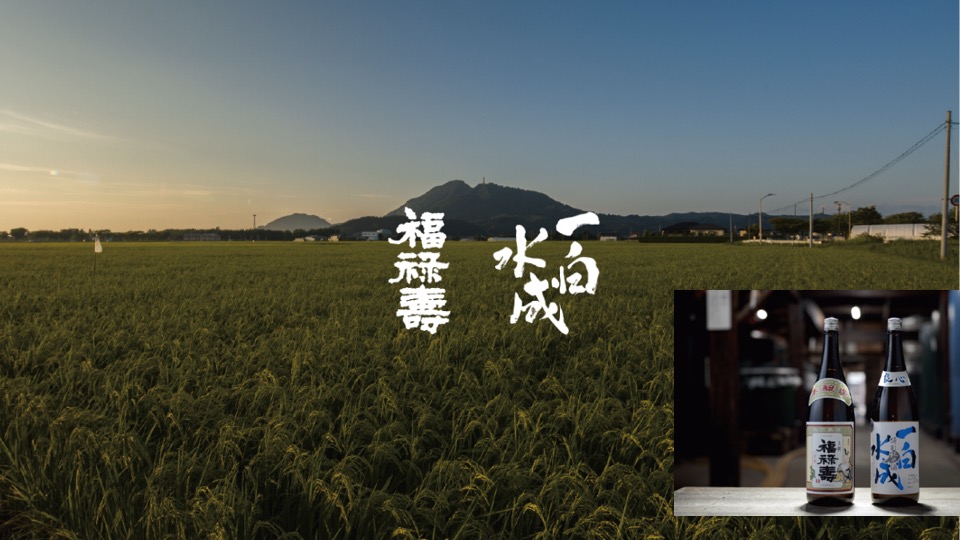 Fukurokujyu Shuzo Sake Brewery is located on the corner of the morning market street, which is famous for 500 years, so the brick wall of the sake brewery and the signboard with the brand engraved form the typical townscape of the town. Four buildings, the upper sake brewery, the lower sake brewery, the office, and the residence, are designated as nationally registered tangible cultural properties. The brewery uses underground water from Moriyama which stands in the center of the town. The clean water that springs from Mifudoson has been filtered to the ground over many years to become abundant spring water, which also springs from the basement of the warehouse. It has a refreshing texture and is recommended for those who care about beauty and health. They also cultivate rice suitable for sake brewing under contract with a local farmer of the Gojome Town Sake Rice Study Group. The sake brewed by local rice, water and people creates harmony unique to the local area and makes it even more delicious. 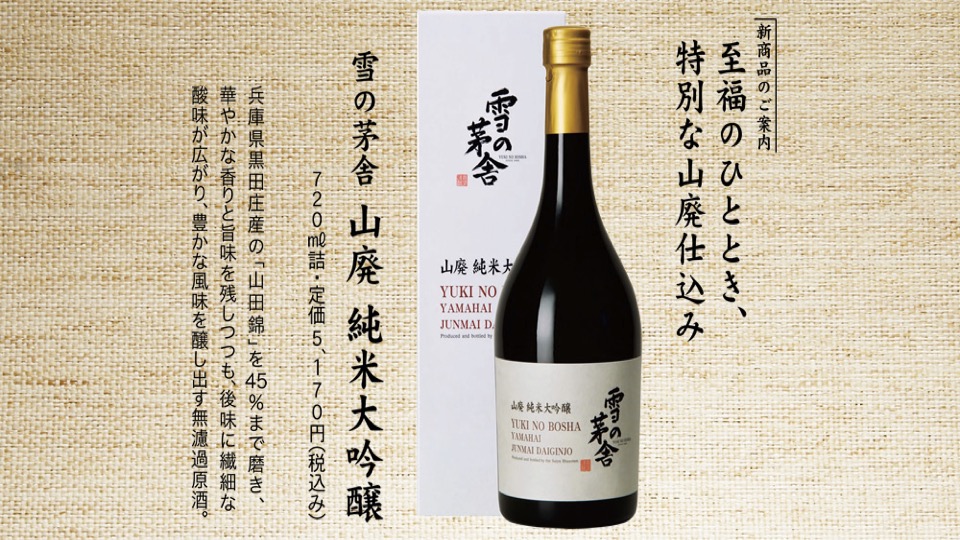 Our storehouse was founded in 1902 by the first Yataro Saito. Eleven buildings, including our houses, stores and warehouses that remain as they were at that time, are registered as national tangible cultural properties. The store is composed of a large-scale Machiya with eaves and has a unique design that incorporates a Western-style design on the second floor. Nishizo, Nakazo, and Tozo at the back of the site are large-scale storehouses, and together with the gate and library storehouse, are valuable buildings that tell the development of the local industry. At Saiya Sake Brewery, the brewer himself and a local farmer contract to grow the rice suitable for sake brewing, “Akita Sake Komachi”. We have also signed a contract with a farmer in Kurodasho, Nishiwaki City, Hyogo Prefecture, to cultivate the finest sake rice, “Yamada Nishiki”. The quality of sake rice also affects sake brewing. For better quality, we visit the fields every year, analyze the harvested rice and set up a place to exchange information with the producers. “Yuki no Kayasha” is brewed using these special sake rice. 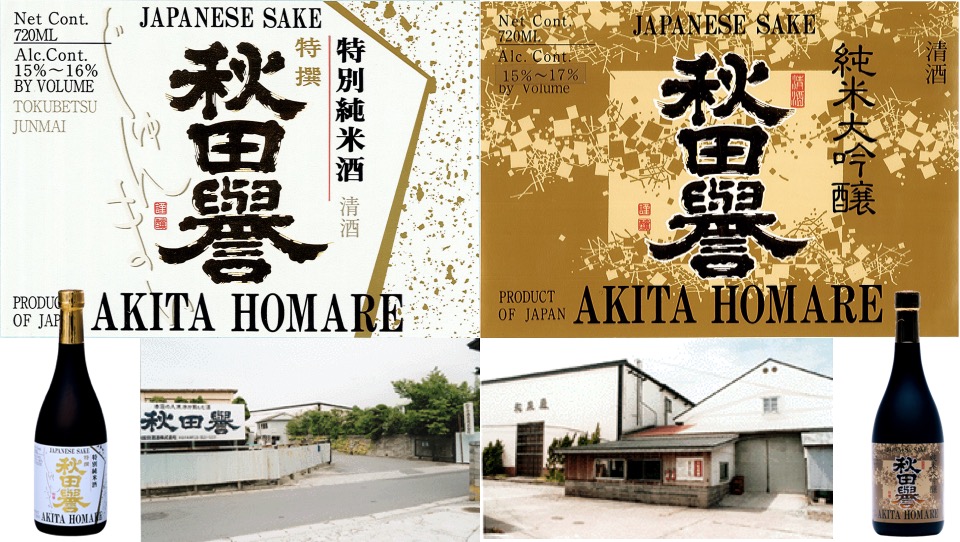 The brewery is located on the left bank of the Koyoshi River, near Honjo Port. This storehouse was established by a joint venture of more than a dozen companies in Gunuchiho during the war. The founding of each joint warehouse is from the end of Edo to the beginning of the Meiji era. Since the 1955’s, the brewery has endeavored to expand sales channels, and especially in Hokkaido, which was supported by the coal economy and sake was widely drunk. Even now, the brewery has a wide range of sales channels outside the prefecture, mainly in the Hokkaido market. 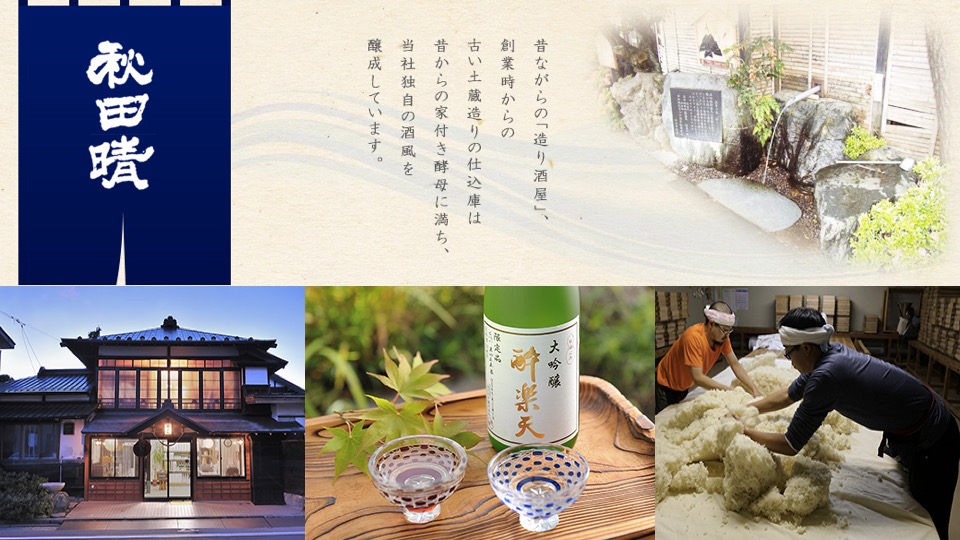 Kunimansai Sake Brewery, the predecessor of the Akita Sake Brewery, was founded under the name of “Marucho-san” by the first Shinsuke Kawaguchi, who achieved good results as Amimoto and had the opportunity to save money. Mr. Sono Kikuchi, the chief of the Akita Tax Office at that time, granted a license to manufacture 200 stones on October 15, 1891. It was named “Kokumansai” to celebrate the great victory of the Russo-Japanese War. The two companies merged on October 1 2012 to become Akita Sake Brewery. Araya of Akita City was once known as the birthplace of local sake in Akita, and was famous as a production center for sake. It is Akita Haru’s mission to deliver delicious sake to many people, inheriting the pride and tradition of the birthplace of Akita local sake. 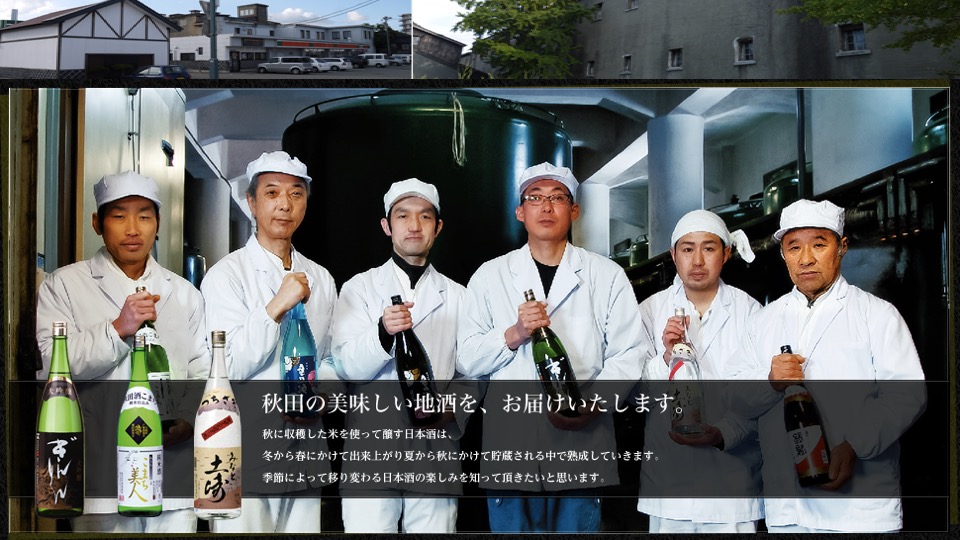 The greatest heritage of Nawa Shoten Sake Brewery is the concrete warehouse designed by Masayo Hanaoka and completed in 1933. Equipped with the latest rice milling machine, a winch is attached to lift the washed vat to the roof and dry it. At that time, most sake breweries relied on the rice milling and human power of the storehouses and water wheels, so they were the envy of many spectators from inside and outside the prefecture. The Akita-style sake brewing method, which was taught in the now-defunct “Hanaoka-sensei’s room” without any time to rest, will be said to be continuous until posterity. We provide sake brewed with the blessings of nature and the technology of our predecessors and we will continue to devote ourselves to providing sake that makes us feel relieved and happy.