Okayama Prefecture is located in the Chugoku region of Honshu. It borders Tottori Prefecture to the north, Hyogo Prefecture to the east and Hiroshima Prefecture to the west. The prefecture is generally said to be a blessed area with the fewest high and steep Japanese terrain. The variety of Okayama rice has grown from ancient times in the northern Chugoku Mountains, the Kibi Highlands, and the fertile southern plains. Bizen and Mimasaka were already known as countries that had rice in the 9th and 11th centuries, and in the early 18th century, Bizen rice was particularly well-known among the various rice breweries in Osaka. Since the Meiji era, there is “Omachi rice”, which is a typical rice suitable for sake brewing that has made Okayama prefecture a stable rice producing area. As for Okayama’s sake, there is even a song about “Kibi sake” in “Manyoshu”. In the Nara period book “Harima Fudoki”, the country of Kibi was the birthplace of rice sake in ancient times, and Mimasaka was made from the accent of “Umasaka”, which is “delicious sake”. As there is a description that it means “a country where you can make sake,” you can see a part of how Kibi no Kuni has brewed sake from ancient times. 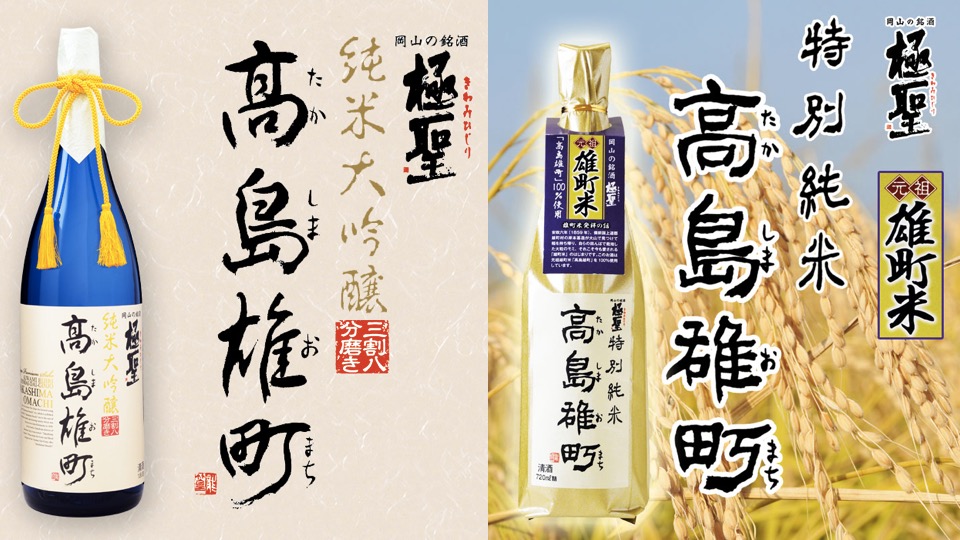 Kamezo Miyashita and Motosaburo Miyashita, the brothers that founded Miyashita Sake Brewery were born in Akaiwa County (now Akaiwa City). During that time the brothers gained experience in the brewery, as this relative managed a brewery business. Taking the opportunity of Uno Port’s harbor construction in 1909, they started brewing sake anew in 1915, at the city of Tamano, in Okayama Prefecture. This was the start of Miyashita Sake Brewery. In 1967, the brewery was relocated to its current location (Nishigawara, Naka-ku Okayama-shi) by Asahigawa River, one of the three major rivers in Okayama. The underground water of Asahigawa River, drawn from 100 meters beneath is used for our brewing. The location is exceptionally blessed for brewing – nearby is Korakuen, one of the three famous gardens of Japan, and also cold spring of Omachi, chosen as one of the 100 Best Waters of Japan. The brewery is aspiring to become a comprehensive liquor manufacturer that produces all types of liquors, such as shochu, liqueur, low-malt beer, spirits and whisky as well as sake and beer. Currently, in addition to selling at the greater metropolitan areas such as Tokyo and Osaka, we are also expanding our liquor export to the US, Europe and Asian countries such as China.