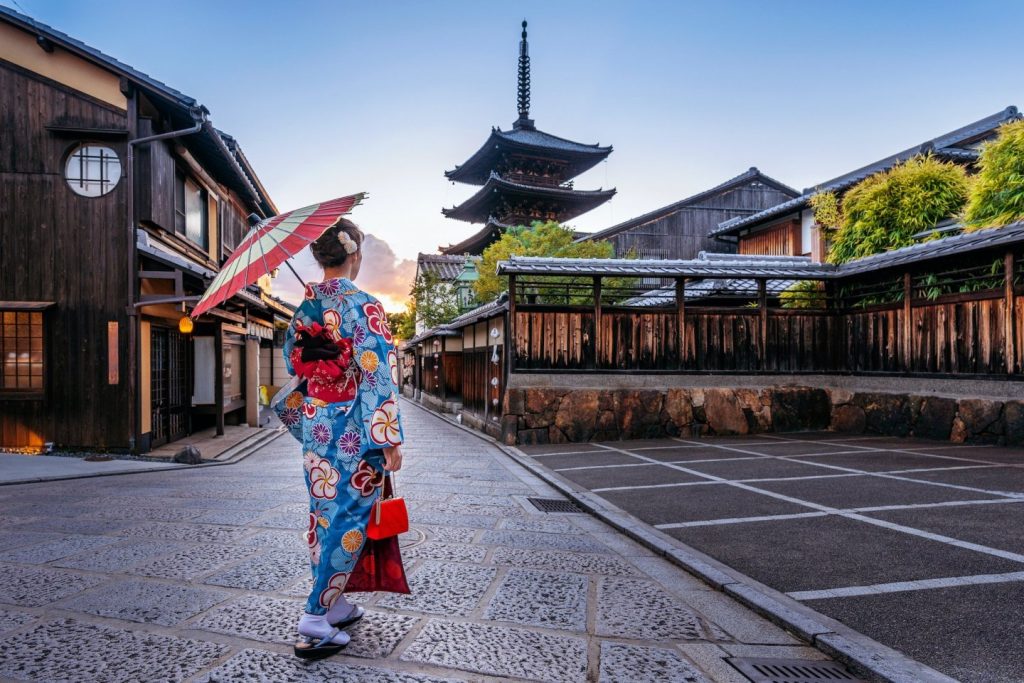 Kyoto City is the capital city of Kyoto Prefecture in Japan. Located in the Kansai region on the island of Honshu, Kyoto forms a part of the Keihanshin metropolitan area along with Osaka and Kobe. As of 2021, the city had a population of 1.45 million, making up 57% of the prefecture’s total population. In 794, Kyoto (then known as Heian-kyō) was chosen as the new seat of Japan’s imperial court. The original city was arranged in accordance with traditional Chinese feng shui following the model of the ancient Chinese capital of Chang’an. The Imperial Palace faced south, resulting in Ukyō (the right sector of the capital) being on the west while Sakyō (the left sector) is on the east. The streets in the modern-day wards of Nakagyō, Shimogyō, and Kamigyō-ku still follow a grid pattern. Kyoto is considered the cultural capital of Japan and a major tourist destination. It is home to numerous Buddhist temples, Shinto shrines, palaces and gardens, some of which are listed collectively by UNESCO as a World Heritage Site. Prominent landmarks include the Kyoto Imperial Palace, Kiyomizu-dera, Kinkaku-ji, Ginkaku-ji and the Katsura Imperial Villa. Kyoto is also a center of higher learning, with Kyoto University being an institution of international renown. 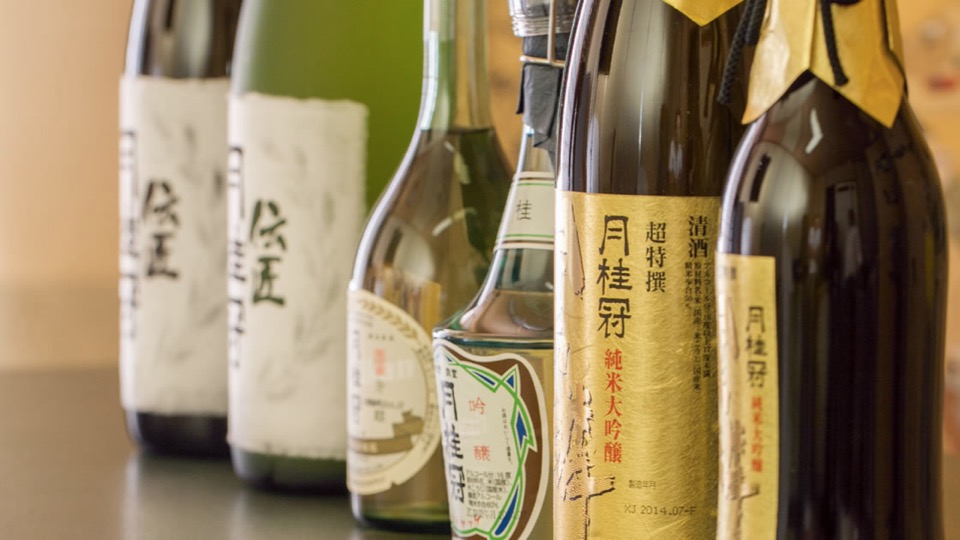 Founded in 1637 (Kanei 14), the first Haruhiko Okura came out from Kasagi Town (now Kasagi Town, Soraku District) in the southern part of Kyoto Prefecture to Fushimi, Kyoto, which was a busy castle town and post town. The name of the shop was called “Kasaokiya” and the name of sake was called “Tama no Izumi”. In the Meiji era, introduced science and technology to sake brewing, and in the heyday of barreling, launched preservative-free bottles. In 1910 (Meiji 43), developed a “small bottle with a cup”, which was adopted as “sake sold at stations” during the time of the railway institute at that time, and became the reason why the laurel wreath became widely known. Since then, with the motto of “Quality First,” they have been brewing high-quality sake while utilizing the four-season brewing system, which is the first in Japan to brew sake throughout the year, and new technologies. In recent years, they have transferred the technology of the four seasons brewing system and new brewing method that has been refined in Japan to the United States, and have been operating a sake brewery locally to supply sake to the world. In 1984 (Showa 59), the industry’s first “raw sake” that can be distributed at room temperature was released, and in 2008, the industry’s first “sugar-free” sake was released. Utilizing our ability to make proposals, they commercialize a wide variety of sake, from high-end classes to popular types, and while constantly taking on challenges with innovation and creativity, deliver the world’s highest quality products. 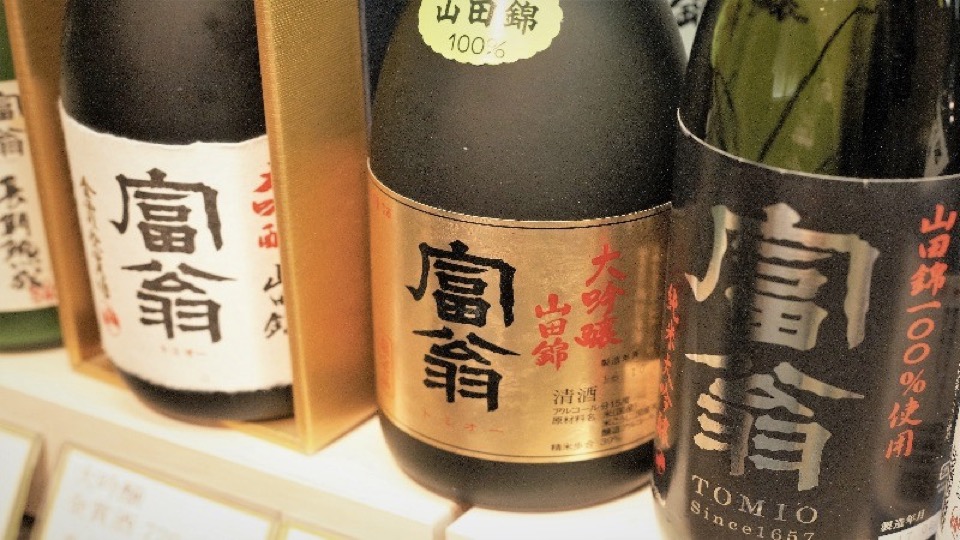 Kitagawa Honke, were founded in Fushimi, Kyoto in 1657 during the Edo period. They are particular about the traditional techniques and ingredients that have been handed down for over 350 years and have walked along with the food culture of Kyoto in an environment blessed with the abundant water of Fushimi, Kyoto. We have further refined our traditional skills and have won a total of 18 gold awards at the National New Sake Appraisal. (As of June 2017) In addition, by actively introducing modern equipment and the latest technology, we are striving to combine the latest technology and human skills to provide customers with truly valuable sake. In the early Edo period, the first Shirobei, who ran a boat inn called “Funaya” near Bungobashi (Kangetsukyo) along the Uji River (Yodo River), started making sake for customers by himself. It is said to be the first step. There are 83 sake breweries in Fushimi in 1657 when the liquor stock system was established, and “Sakeya no Sake” is a representative sake of Fushimi. It is said that he was carried to Edo and caught the tongue of an eastern person (Azumabito). Unfortunately, there is no literature left before this, so it was founded in the third year of the Meireki calendar. 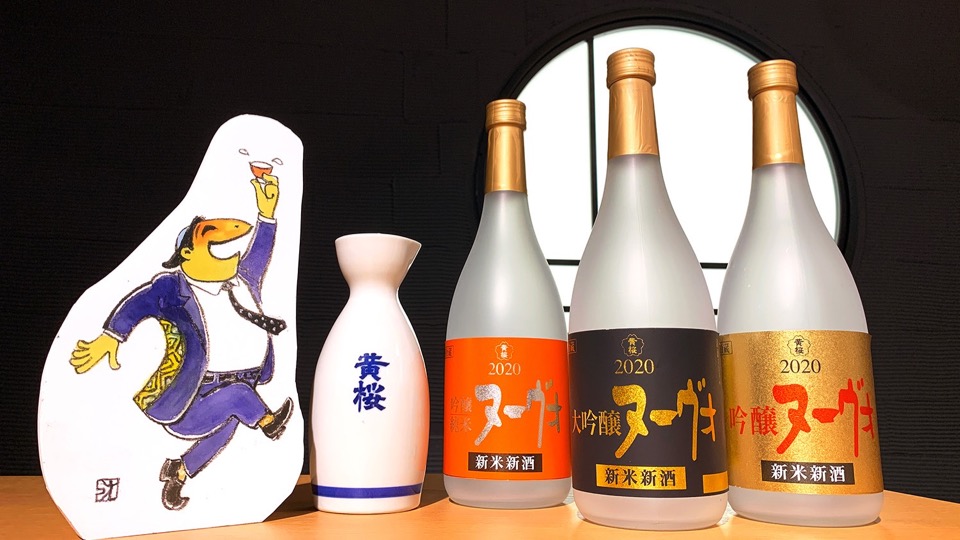 Kizakura was founded in Fushimi, a long-established store with a history of hundreds of years, more than 60 years ago. In fact, it is a fairly young company in the sake industry. Taking advantage of our position as a latecomer manufacturer in the industry, we have gained the support of our customers for TV commercials that were pioneered in the industry and product development that is not bound by the concept, with “original ideas” and “innovative actions”. Sake brewing is a traditional culture. However, no matter how advanced the technology is, tradition and culture cannot be preserved by the manufacturer alone. Kizakura not only delivers affordable products that are familiar to customers, but also provides a place where you can feel sake more closely, so that you can deepen your understanding of Kizakura and, by extension, sake culture. 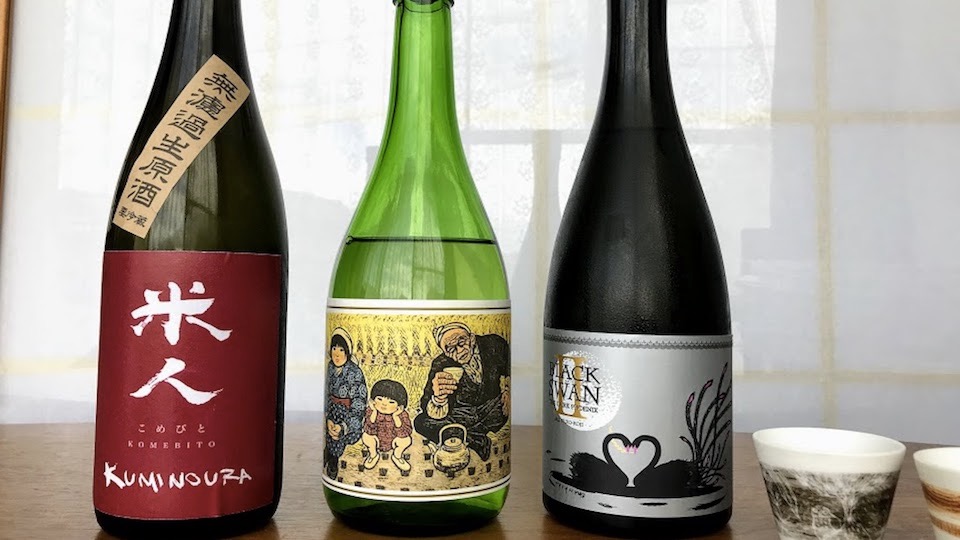 Town Kumihama lies northwestern of Kyoto Prefecture along the coast of the Japanese Sea. The town faces along Kumihama Bay, an inland sea separated from the ocean by white-sand beach and a stretch Of sandbar. Its ever-changing seasonal beauty never fails to attract both tourists and locals alike. Our sake brewery was founded in 1943 through the emergence of several breweries with histories dating from the Edo period. From the brewery, at the rearmost shore of the bay, we can see the grandeur Of the inland sea. The name Of Our sake “Kumi no Ura (the Eternal Beauty Of the Bay) is inspired by this destination. Our brewery master (toji) Tatsuro Kakimoto was trained by one of the most renowned schools in the field, Tajima Toji. With Kakimoto’s continuous efforts and passion to make our sake more profound each season, our Junmai-shu and Ginjo-shu are continuously transforming. 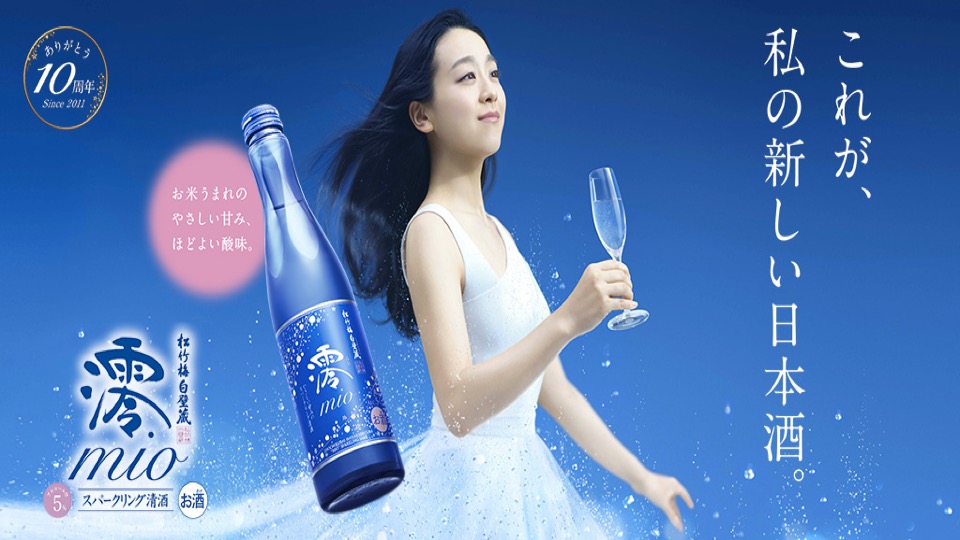 As the sake for celebrations, Sho Chiku Bai has become the foremost brand in the special occasion and gift sake market. Completed in 2001, the Shirakabegura Brewery combines leading-edge facilities that recreate traditional, artisan-inspired brewing techniques and sake brewing by hand to pursue the really good and great-tasting sake. At the facility, Takara Shuzo produces such quality sake as Sho Chiku Bai Shirakabegura Mio, the new-concept sparkling sake, and Sho Chiku Bai Shirakabegura Kimoto Junmai. In addition, in 2018,  refreshed Sho Chiku Bai Ten, a top seller thanks to its clean and refreshing feeling created by a unique two-stage brewing process utilizing two different strains of yeast, making it even tastier and richer, turning it into a brand that can meet the diverse needs of our customers. Meanwhile, in the restaurant and bar market, Sho Chiku Bai Gokai enjoys strong customer endorsement. Takara Shuzo shall keep providing new Sho Chiku Bai products in pursuit of quality of brewing and ingredients. 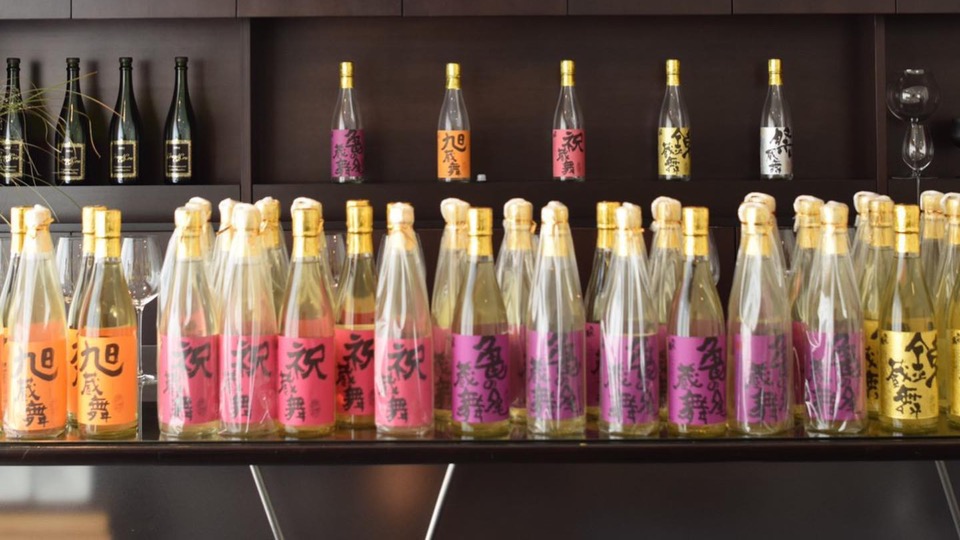 To produce the finest quality sake, share prosperity in the region and contribute to a happier community. They want to maintain their identity as a regional sake brewery and stay connected with the members of the community. Once this connection is made they hope it will be transferred, person to person beyond the limits of Japan, to the world. In order to demonstrate how precious our community is, the company should perform a positive role from within it. We care for it as we care for the earth. That the ideas above should guide the management of Takeno Brewery. The company policy: To always put the customer first and create the finest possible products. To provide an atmosphere of creative vitality for employees to foster their self-improvement. To maintain a strong bond with all those who share the company’s prospects and not lose sight of the company principles. 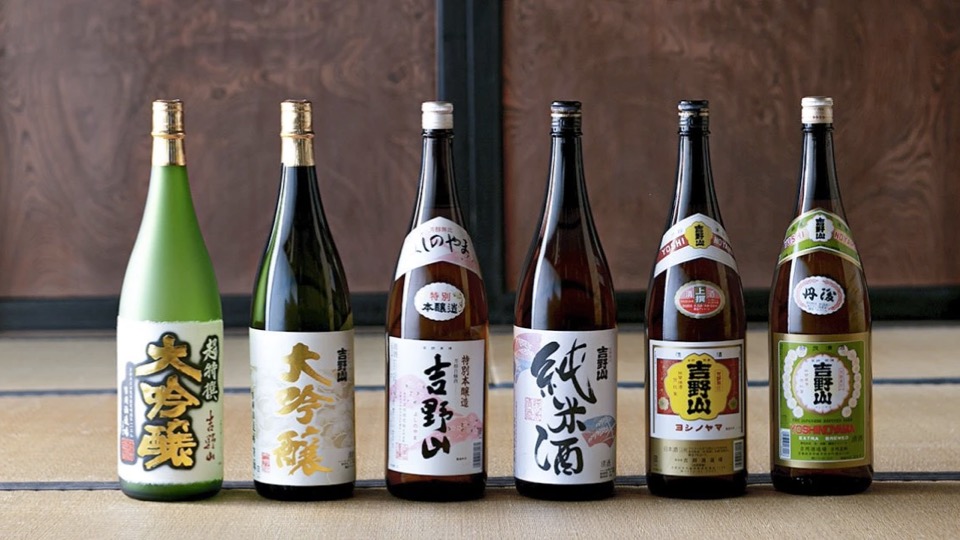 A traditional sake brewery that retains the remnants of the Edo period. There are three mountain ranges on Tango Peninsula, which faces the Sea of ​​Japan and has the national special scenic spot, Amanohashidate. One of them, Kongodojiyama (613.4m), which is the main peak of the Kumano mountain range, is said to have been trained by an actor and is the highest mountain in the former Takeno district where Hosokawa Gracia retired. In Yasaka-cho overlooking Kongodojiyama, the first Naoshichi Yoshioka obtained a sake brewing license in the first year of Kansei (1789). Taking the name of Mt. Yoshino, which used to be in the southeastern part of the Kumano Mountains, as a brand, we continue to make sake using the underground water of Mt. Kongodoji. A sake brewery where a pure stream flows into the site, which used to be milled with a water wheel, and the river deer crows in the summer and the persimmons grow in the fall. While feeling the climate and the seasons, Tango rice and the people of Tango nurture good sake.