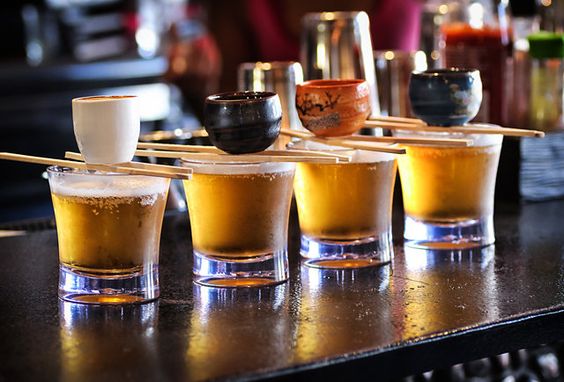 How To Sake Bomb

In this sake video, Master of Sake, Yuji Matsumoto, introduces the way of drinking Sake bomb. Sake bomb is one of the most popular ways of drinking sake. This drinking ritual is actually quite entertaining, with college students carrying out this tradition in sports bars and in Japanese restaurants for years. Watch the sake video to see how to properly do a Sake Bomb.

The sake bomb or sake bomber is a beer cocktail made by pouring sake into a shot glass and dropping it into a glass of beer. Two chopsticks are placed parallel on top of the glass of beer, and the shot glass is carefully balanced between them. The sake drinker slams the table with their fists, causing the sake glass to fall into the beer. It should be drunk immediately, and works best with warm sake. Alternatively, the drinker may count to three in Japanese, “ichi…ni…san…SAKE BOMB!” Or they may simply yell “KANPAI!”

If you’re not a huge fan of the sake-beer combo, there’s also a variation of the sake bomb, which is to “bomb” a shot of warm sake into chilled Red Bull energy drink. Try it out, and it will be a perfect warm-up for your next party!